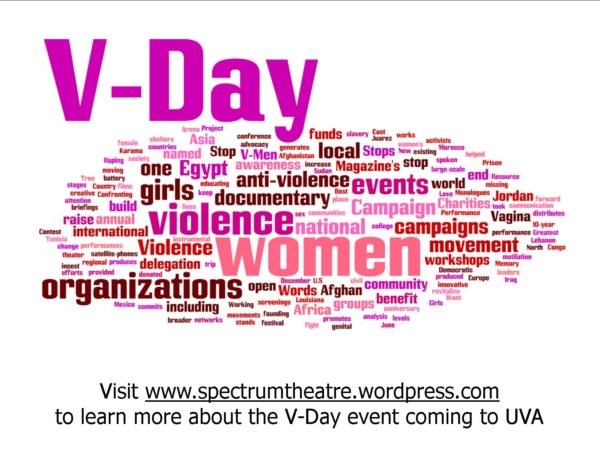 Usually, 14th of February, Valentine’s Day, is associated with love and dedicating your day to your close ones. But now for more than 20 years, a movement called V-Day is also taking place at the same time.

V-Day is a global activist movement with the aim to end violence against women and girls. It started on February 14, 1998, when the author, playwright, and activist Eve Ensler organized the first performance of her play The Vagina Monologues in NYC. The performance raised over $250k for local anti-violence groups. After that V-Day was formed and became an organization with a mission to raise funds and awareness to end violence against women and girls. They emphasize that they involve all women and girls including cisgender, transgender, and those who hold fluid identities.

V-Day promotes creative events that raise awareness and money. Traditionally every year volunteers and college students produce benefit performance of The Vagina Monologues to raise awareness and funds inside their communities. Throughout the years the movement has gotten bigger and now thousands of V-Day benefit events take place produced by volunteers all around the world to educate people about the reality of violence against women and girls. This year will be no different and many events around the world are being organized during a V-Season, which takes place from 1st of February until the 8th of March.

The United Nations defines violence against women as any act of gender-based violence that results in physical, sexual, or mental harm or suffering to women. Even though gender-based violence has always been the problem there doesn’t seem to be a decrease but rather an increase in cases or at least more cases are coming out. The International Union for the Conservation of Nature (IUCN) recently carried out one of the biggest (two years and more than 1000 sources of research) studies yet about the issue. Their main finding was that climate change is increasing gender-based violence. Gender-based violence is used to reinforce existing privileges and power over roles and resources. For example, poor access to scarce resources can increase practices where women are forced to sexual activity in exchange for food. The full study can be found here.

1 in 3 women, which makes 35,6% of women in the world, experience sexual or physical violence during her lifetime, according to the report from the World Health Organization (WHO). And this statistic does not include sexual harassment. 72% of human trafficking victims are women and girls. There are about 650 million women and girls in the world who were married before the age of 18. Although, during the decade this number has declined. At least 200 million women and girls between the ages of 15 and 49 have undergone female genital mutilation. In most of these countries, the majority of girls were cut before the age of five. All of these statistics show clearly that gender-based violence is still a big issue in the world. (More statistics can be found here.)

Therefore, movements such as V-Day are important to raise people’s awareness of this still existing issue. And in addition, to start the discussion on how we can help the survivors and, in the end, how we can tackle the problem.

A Woman’s Choice: Wearing What We Want