NGOs around the world join in solidarity to campaign for the International Day for the Elimination of Violence Against Women on November 25th – and so does Center for Girls (CFG). The long weekend hosted a variety of awareness-raising activities for the purposes of educating local communities on the types of violence experienced by women. The International Day for the Elimination of Violence Against Women seeks to raise awareness around one of the most widespread and persistent human rights violations that plague every corner of our world and aims to mobilize change. Gender inequality and gender-based persecution are expansive problems that include multiple forms of abuse and in order to combat them, education and empowerment are needed to counter the patriarchal-related cultural norms that are often the fostering factors of the abuse.

As mentioned, violence targeting women and girls can come in a variety of forms, some of which often leave the victim questioning whether they are even being abused or worse, blaming themselves. Sexual assault, rape, emotional, verbal, financial, harassment, human trafficking, age-related – these are all forms of abuse. The often-overlapping nature of these violations means awareness and support are the most needed aids in today’s fight against inequality abuse.

Some hard-hitting facts which symbolize the harsh realities of gender abuse have been compiled and explored by various organizations including the UN, UNICEF, UNODC, WHO, for many years, namely –

The new joint European Union and United Nations “Spotlight Initiative” is aiming to address the problems of under-funding experienced at the national level in targeting all forms of violence against women and girls, in line with the 2030 Agenda for Sustainable Development. While funding has historically been a source of slow-yielding results, new legislation and policy at the national level are still needed to further successfully prosecute perpetrators and thus create a cultural reputation that any form of gender-based abuse is not tolerated. Violence against women and children has long been present in the domestic cultures of nearly all societies, but it has also been historically highlighted in conflicts and wars. Atrocities such as the ISIL persecution of Yazidi women in Iraq and Syria and the persecution of the Rohingya minority in Myanmar are but two current topics of injustice that have cultivated gender-based violence. Examples like this have existed throughout history – from the infamous abuse of the disgustingly ironically named “Korean Comfort Women” of World War 2 to the present day, proving that the fight is still on to combat this widespread flaw in human decency. International and national criminal legislation must be constantly modernized and strengthened in addition to the improvement of cultural norms. 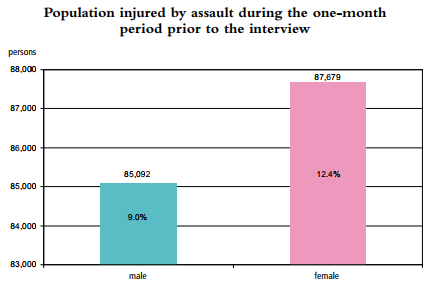 Table courtesy of the Report on Gender-Based Violence Against Women and Girls (VAW/G) Indicators – UNDP.

As the table shows, within just a one-month period is it clear to see that in Thailand especially, females are at a statistically higher risk of experiencing some form of physical or sexual assault. Not to marginalize the male victims, the focus on women is merely a statistical reality in the country and subsequently representative of the gender norms that foster this one-sided ratio.

The town of Chiang Khong in the northeastern region of Thailand has, like other Mekong regions, experienced its share of injustices. Due to the close proximity with the Laos border and the infamous Golden Triangle region just a short distance to the west, violence against women and girls has long been facilitated with complicated factors such as organized crime. The region also plays host to many “hill tribes” of various ethnic minorities such as the Hmong and Karen people. Center For Girls has found these isolated communities often include such conservative and patriarchal social constructs that gender inequality and the subsequent abuse experienced by women and girls can manifest itself in traditions such as child marriage, which carries with it a plethora of other problems. It is for these reasons that a continued and exhaustive effort to campaign for the rights and empowerment of women and a change in the cultural practices that foster abuse is critical to the social development of the region.

CFG works to protect the rights of women, children, and vulnerable people through sustainable, community-based projects; for example:

Women for Change is a province-wide initiative to empower women by focusing on increasing knowledge and awareness of issues surrounding gender equality and women’s rights. It also aims to enhance women’s confidence in their collective power to make positive changes in their own lives and their communities. Upon completion of the program, women become members of the Women for Change Network. This Network is designed as a resource to seek advice, report instances of GBV, and raise awareness of the issues women face long after the project is finished. CFG is looking towards the future, for the next goal, the next challenge which must be faced. One such proposed project is the targeting of the norms surrounding child marriage among the Hmong communities, by advocating the importance of education for young children in their formative years as well as the health risks associated with early marriage.

Projects such as these all have gender-relevant tones, which is why the International Day for the Elimination of Violence Against Women is such an important, overarching theme that should be reinforced and disseminated as widely as possible because the wider relevance is vast to communities all over the world.

We urge anyone capable to get involved, from something small such as simply sharing conversations with friends to raise awareness, to something bigger such as a fund-raising activity for a designated charity. Something as simple as sharing an empowering image with the hashtag “#OrangeTheWorld”, will make you a part of this international movement.