9 Latest Key Findings the UN Made on Human Trafficking Worldwide

Human Trafficking is a worldwide phenomenon. As it’s for the most part happening behind closed doors though, numbers are hard to gather. How many individuals are affected, and what form of exploitation are they exposed to? To bring up the extent of these daily human rights violations is crucial to combatting human trafficking. This is what makes reports like the Global Report on Trafficking in Persons 2018 such significant pieces of work: Published this week by the United Nations Office On Drugs And Crime (UNODC) it shows the latest statistics on human trafficking in 142 countries mostly referring to 2016. Center For Girls studied the full report being very grateful for UNODC’s important work. These are nine facts and figures we want to highlight:

(1) “There has been an overall increase in the detection of victims of trafficking in persons across the world in recent years”
This growth includes both positive and negative developments. On the one hand, UNODC observed that “the average number of detected victims per country has increased over the last few years” – this shows that every effort to fight human trafficking is urgently needed. On the other hand, numbers increased because UNODC was able to collect broader data than for the last editions of the Global Report stating that “the capacity of national authorities to track and assess patterns and flows of trafficking in persons has improved in many parts of the world” – which is great: Governments take human trafficking seriously and invest resources to capture its dimensions. 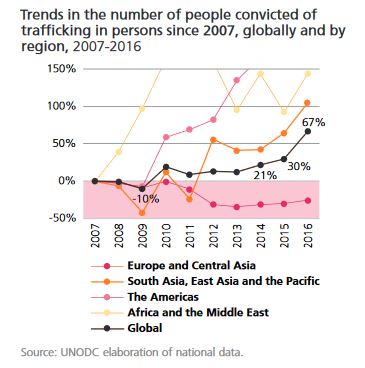 (2) “Most trafficking victims are detected in their countries of citizenship”
As we pointed out in our myth-busting post, human trafficking doesn’t necessarily include movement. Quite the opposite takes place: “Victims who have been detected within their own national borders now represent the largest part of the victims detected worldwide” which UNODC claims to be a development of the past fifteen years. Hence, just as Center For Girls does, it is important to work closely with local communities and to understand regionally specific mechanisms that lead to human trafficking. 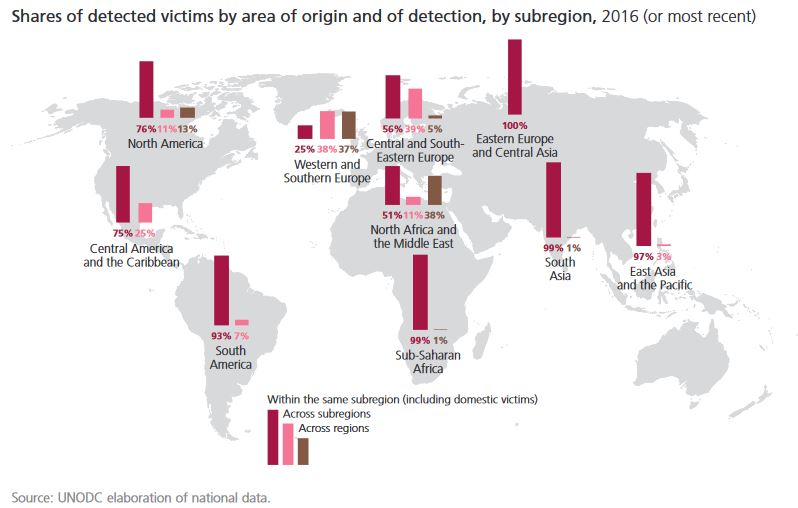 (3) “Countries in East Asia detect far fewer victims per capita than countries in Europe and the Americas”
Human trafficking is a complex crime. Thus it is extremely important to record every single instance in order to capture its many facets. Only with this knowledge, the right measures can be taken to tackle these human rights violations. And: to put an end to the widespread impunity relating to human trafficking – that, according to UNOCD, in East Asian countries is even more prevalent as the average conviction rate recorded in the Global Report 2018 “is lower than many regions in the world”.

(4) “Different patterns of trafficking emerge in different parts of the world along with different forms of exploitation”
In absolute terms, “most of the victims detected globally are trafficked for sexual exploitation”. This prevalence differs from region to region though as “trafficking for forced marriage, for example, is more commonly detected in parts of South-East Asia, while trafficking of children for illegal adoption is recorded in Central and South American countries”. In East Asia and the Pacific over 60% and therewith the majority of detected survivors were trafficked for sexual exploitation, while the second biggest group amounting to 38% were trafficked for forced labor. These variations of human trafficking show how significant it is to set up combating programs according to local structures.

(5) “Most of the victims detected across the world are females; mainly adult women, but also increasingly girls”
That rather females face human trafficking is a reality UNODC observes for 15 years now. Almost every second survivor of human trafficking in 2016 was an adult woman, “women and girls together continued to represent more than 70% of detected trafficking victims”. This doesn’t mean men are safe from it since “more than half of the victims of trafficking for forced labor are men”. In order to sustainably reduce instances of human trafficking on a large scale, it remains crucial to empower women and girls and to change the way societies around the globe value females in general.

(6) “In East Asia and the Pacific, females accounted for about half of all convicted trafficking offenders”
On a global scale, the majority of traffickers are males. It is exceptional that “large shares of female offenders continue to be reported by countries in East Asia and the Pacific” with Myanmar and Thailand showing “particularly high numbers of females prosecuted and convicted of trafficking in persons”. Center For Girls focuses on awareness-raising, education, and the empowerment of women and children in the local communities of Chiang Khong – so that recognizing human trafficking and understanding its cruelty become common knowledge.

(7) “The many available ways of using the internet makes it easier for traffickers”
“…to identify and get in contact with victims, and at the same time avoid detection by limiting physical interaction.” In its Global Report 2018 UNODC statistics that the anonymity that many online services offer as well as being easy to use simplify trafficking in a transnational dimension. Since teenagers and children as “digital natives” rather talk about new applications and other online services among each other than with parents or teachers, it is important to point out possible dangers even to the youngest so that empowered children can also take care of each other.

(8) “In the countries of the Mekong area, more child victims, especially girls, were detected”
In 1997 Nunnaree Luangmoi founded the Center For Girls in Phan District, located between Chiang Mai and Chiang Rai where Nunnaree was born and raised. In 2012 the organization combating human trafficking and violence against women and children moved to Chiang Khong District, right at the Mekong on the border of Laos – for a reason: Learn more about the specifics shaping our region here.

(9) “The trafficking of children – particularly girls – remains a key concern“
There is little to add. As long as the most vulnerable members of our society are trafficked, into forced labor, forced marriage, or prostitution, and deprived of their childhood, it can be nothing else than a key concern of the international community as well as of each one of us. Center For Girls is happy to make this main policy implication of UNODC’s Global Report 2018 reality for over twenty years now:

“Dedicated training can make practitioners better equipped to detect and assist these victims, ensuring that the best interest of the child is safeguarded. Teachers need to be part of a holistic approach to prevent trafficking and reduce the vulnerability of children to becoming trapped in exploitative patterns. Anti-trafficking interventions for children can be more effective if they are included in programs to provide quality education for all.”

Please find the full Global Report on Trafficking in Persons 2018 including all shown charts here.